The traveling fashion show was made famous by Eunice Johnson, wife of John Johnson, who took over as fashion director after the passing of Gertude DeKnight. It transformed from a regular feature in Ebony Magazine (named by Eunice) into a charity event. The annual event that brought the who’s who out in each city it arrived in was a two hour show. Included in it were ready to wear, evening, swimwear, and bridal sections. 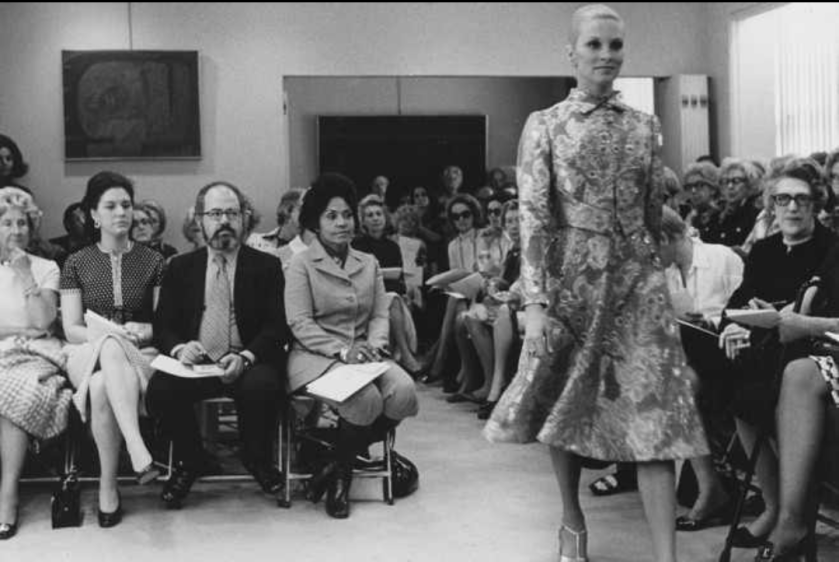 Eunice Johnson is the only African American at a salon fashion viewing. She’s also sitting front row, and area reserved for the most prestigious in the industry.

When the Ebony Fashion Fair show began in the 1950’s, the Johnsons were were met with great opposition. Racial tension was high due to segregation, and they had to overcome obstacles such as finding hotels that will allow people if color to stay, convincing designers to allow Eunice into their salons for shows, further convincing them to allow her to purchase their pieces for her shows. Many were reluctant because they were concerned about how other patrons would react to high fashions on black bodies. As soon as one designer said yes, others followed suit and allowed their designs into the show. Photos of Eunice Johnson with a young Yves Saint Laurent, invitations for Valentino, Oscar de la Renta, Christian Lacroix, Azzedine Alaïa, are encapsulated in the exhibit.

Known to use her platform to catapult careers of African Americans, Mrs. Johnson hired black models, stylists, designers, and make up artists. She was also known to include designers of color such as B.Michael, and Stephen Burrows alongside Givenchy, Chloe, and Valentino. Models such as Iman and Pat Cleveland have ties to Ebony Fashion Fair. Model, Fashion Fair commentator, and the founder of The Ground Crew, Audrey Smalltz credits her transition into entrepreneurship to the Johnsons.

Eunice Johnson and a young model and fashion designer.

At it’s peak, Ebony Fashion Fair had traveled to more than 180 cities and crossed U.S. borders into Canada and even held shows in the Caribbean. The reason why it was started is often overshadowed, but it cannot go without mentioning. Over 50 million dollars were raised for charities and hospitals. The last show was in 2009, but it’s legacy lives on in the exhibit that now travels the country just as the fashion show did.

#ArtNews @georgiasouthernuniversity Counseling Center and Active Minds joined forces for an exhibit titled 2021 Active Minds Send Silence Packing® to raise awareness and end the silence around mental health. The exhibit is on both their Statesboro and Armstrong campuses. 📸: @georgiasouthernuniversity #DivaChroniclesMah
I’ve also learned “structure” looks different from person to person and may not be as stringent as you think when you hear someone else’s routine. Do you need structure? What does your structure look like?
The fall collection from @brandonblackwoodnyc is on it’s way! Stay tuned to their IG for a release date.Do you have your eyes on any styles? #divachroniclesmag #fashionnews
#NailsoftheDay These nails by @tahranailsatl are five fall retro vibes. Love! #divachroniclesmag
#BeautyNews #maccosmetics revealed they have inked a deal in partnership with Whitney Houston’s estate for a collection honoring the late legend. More details on #divachroniclesmag
Big congrats to designer and twin brother duo @bruceglen @bruceglencollection on their partnership with #saks. 👏🏾👏🏾👏🏾#Doingit #bigdeal📸 @bruceglen #divachroniclesmag
#DCFashionDiscussion:I was waiting and hoping. Ciara dipped her toe in and gave me a taste with her sequin jersey gown, but I think she played it safe. Football is a well loved sport in America and with her hubby being a football player, it could have had multiple meanings. Jersey dress couture would have been *chef’s kiss*. I wanted bamboo earrings, Air Force Ones, Timberland boots, mini skirts and dresses ah la Lil Kim, Aaliyah and TLC’s baggy girl aesthetic. A sequined bonnet…worn outside 💅🏾😏. I really wanted someone to show up #fortheculture. Especially since we see it in every fast fashion retailer and website. They had the band, could we not “go there” with dancing girls and a flag line? What are your thoughts?? Let’s chat in the comments. #DivaChroniclesMag. -Joslyn, Diva-in-Chief
#FashionandBlackHistory. Designer Ann Lowe Source: @realhistoryuncovered #divachroniclesmag
@priscastyleme delivered with the office looks inspo! #divachoniclesmagazine
The Combs girls (Jesse, Chance, and D’Lila) rocked the runway at the #DolceandGabbana couture show!! L*O*V*E Head to our stories to see them in action!📷 @myfancychance #divachroniclesmagazine
Weekend photo dump. Here’s to catching up and closing out the restaurant. #divaslife🥂
Been seeing this float around and decided I’ll play along. I float between #3 and #4. Outfit is always last for me. What about you? 📸 @naturalhairloves